Green City Watch is a geospatial AI firm specializing in urban ecological engineering. It leverages the Industrial Internet of Things (IIoT) technology to empower municipalities and local councils with data-driven urban ecology. Green City Watch empowers 30+ (mega)cities, from Boston to Amsterdam to Jakarta, to understand, monitor, and improve their urban forests through data-driven decision-making. Their TreeTect™ technology provides municipalities and urban foresters with a better overview of their tree inventory. By combining Industry 4.0 technologies with satellites, LiDAR, and drones, TreeTect™ allows municipalities to draw actionable insights about green space in near real-time

Municipalities and urban foresters of Amsterdam and Boston had the vision of maintaining the longevity of urban trees. It was realized that urban trees live just 13 years, while their rural counterparts live up to 100 or more.

Green City Watch wanted to leverage a combination of ecological engineering, machine learning techniques, and remote sensing methods, known as “geospatial AI”, to boost urban tree longevity. In order to help the urban foresters in improving the lives of urban trees, Green City Watch (GCW) had the idea of building an AI-based solution that would give an overview of tree inventory in the Amsterdam and the Boston region. This inventory would further allow the foresters to derive actionable insights about green space in the near-time.

Hence, Greencity Watch was on a lookout for a technology partner who could turn their vision into a software product. The client zeroed-in on Daffodil Software due to our unparalleled expertise in AI technologies, as exhibited in our past projects. The requirement was to:

The project began with our business analysts and software architects outlining the optimal architecture of the solution. They refined the functional requirements and developed a complete product vision and its development roadmap. Once the strategic plans were mutually finalized, Daffodil’s team mapped the requirements onto the technology landscape and suggested technologies such as QGIS, Leaflet, Maply, WhirlyGlobe, Node.js, AWS, TensorFlow, and GBDX as the core technologies for the solution development. 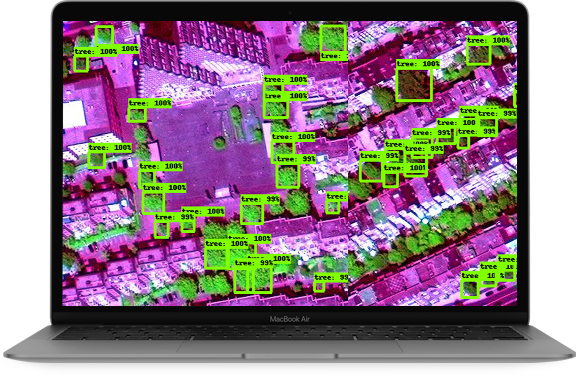 For building the data set for machine learning models, the spatial data captured through satellites were used. The data was stored in GeoTIFF files from which different band information was to be derived. Since different species of trees are identified in different bands, building a single ML model with numerous combinations couldn’t be a solution. Thus, as a solution to the problem, multiple ML models were developed and ensemble modeling was used for prediction.

Ensemble modeling is a process where multiple diverse models are created to predict an outcome, either by using many different modeling algorithms or using different training data sets. The ensemble model then aggregates the prediction of each base model and results in a once final prediction for the unseen data.

Team Daffodil discovered the trees that could be identified in a specific band. Using a combination of 3 bands in a model, 11 machine learning models were created to identify the tree species and their location. These models were further assembled for prediction in the Amsterdam and Boston region. More than 90% of trees, captured from different angles and in various seasons were identified using the models. 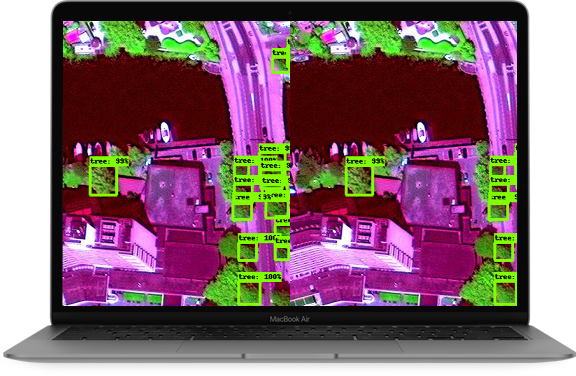 In order to optimize the resources and cost involved in the development, a number of cloud services (AWS) were utilized. AWS SES for email notification, AWS ECR to store docker images, AWS Sagemaker to run docker containers in GPU environment, AWS S3 Bucket for data storage, AWS Lambda to scale up or down the resources, when required. 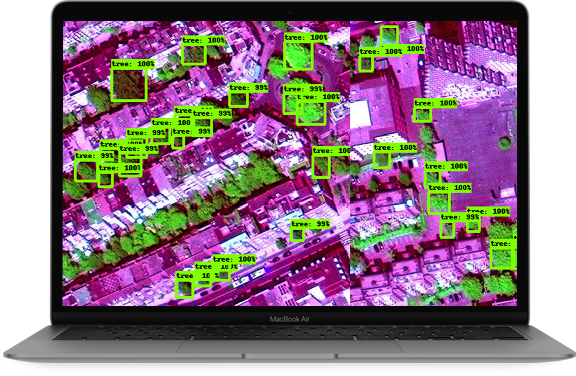 The client has been extremely satisfied by the way Daffodil has executed their vision and have planned for further updates to the system. The TreeTect technology provides municipalities and urban foresters with a better overview of their tree inventory. By combining Industry 4.0 technologies with satellites, LiDAR, and drones, TreeTect allows municipalities to draw actionable insights about green space in near real-time.