The client is India’s leading online retailer for multi-brand cosmetic and wellness products. With an active user base crossing 20 million, the client processes more than 500k orders in a day. With 1200+ brands, and six warehouses across India that stock lakhs of cosmetic products, the client offers a comprehensive selection of makeup, skincare, haircare, fragrances, personal care, luxury, and wellness products for women and men.

An outburst of innovation in the eCommerce industry with technology applications such as Artificial Intelligence, Machine Learning, Voice Interactions etc. has led to eCommerce giants rethinking their engagement strategies. They are striving to swiftly incorporate innovative ways to attract user’s attention by upgrading their existing technological infrastructure.

Tackling a similar challenge, our client previously had a blog section on its website which was built on an outdated version of WordPress. Due to this, it was facing limitations with regards to its features, performance, ability to fetch organic traffic, and thus the conversion rate. There was a need to revamp its website blog in order to take its content marketing game a step further.

The client also had a vast community of active users on Youtube where they had curated numerous videos ranging from makeup tutorials, skincare routines, Q/As, and exclusive content created by the country’s renowned beauty content creators. In order to encourage users to make impulsive yet informed purchases, the client wanted to introduce a new technology innovation based on AI, known as shoppable videos.

They were on a lookout for a technology partner that could help them integrate all the mentioned features into its existing website and mobile app in a seamless manner. The client zeroed upon Daffodil Software considering our expertise in developing innovative eCommerce solutions as well as unparalleled AI capabilities. The key challenges that were presented to Daffodil were:

Developers at Daffodil began the engagement by integrating the shoppable video functionality into the web and mobile apps. The client wanted to fetch videos from its Youtube channel and integrate them into the web and mobile app with the ‘Watch and Buy’ feature. This would allow customers to add products to the bag in real-time while watching the videos, eliminating the need to search for products, even after the video is over. For building this new app feature, a custom video streaming player was developed that fetches content from Youtube. In order to provide a top-notch user experience, the videos were hosted on Akamai CDN .For product tagging in the videos, AI and ML algorithms were developed that fetched product names from Youtube, thereby removing manual intervention. An Embed API was developed, which facilitates users to share videos on third party websites, thereby increasing brand visibility and generating more traffic on their web and mobile apps. For synchronizing engagement stats such as likes and comments from Youtube, automation scripts were written that updates the stats every 10-minute.

For the blog section, a thorough code audit was done to understand the underlying factors affecting the client’s current blog performance. An outdated version of WordPress, malware files, and unnecessary plugins were some of the reasons that contributed to the poor performance. In order to fix the performance issues and introduce new functionalities into the blog, we upgraded the WordPress version from V3 to V4.5. We also performed database cleanup, deleted unnecessary tables, and added new tables to the database in order to support new functionalities. We were able to remove suspicious files (malware), unused/deactivated plugins, and plugins downloaded from unknown sources through a complete codebase cleanup and security audit. The UI/UX of the blog was also improved to ensure a delightful user experience on both the website and the mobile app by using plugins such as Smart Product Viewer, mobi, Awesome Header, and many more. Elasticsearch was used to store, search, and analyze the data in real-time enabling faster and seamless blog access to the users. 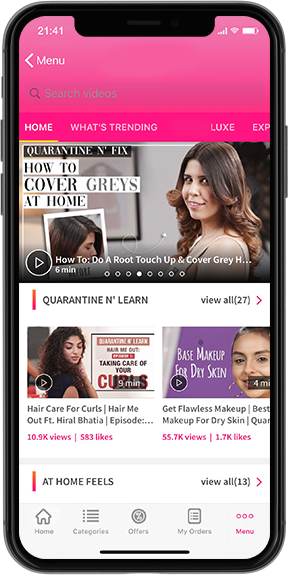 In addition to all that, a user community network was built using Java as the core technology for web and Android mobile apps, Swift was used for developing the network for iOS devices. The interactive user community was developed to engage users with beauty buffs, ask and answer beauty-related questions, give and seek advice, discover trends, and join conversations on topics of their interest. Separate Q/A and video advisory sections were developed in addition to a user posting section similar to a social media posting wall where users could create posts or ask questions. The network section also had a registration tab where users could signup and create their personal profiles to help increase user involvement. Best in class technologies such as MongoDB and MySQL were used to maintain the database for the network enabling the development of multiple classifications and categorizations of the data. Natural language processing tools were used to ensure seamless user experience.

The Laravel PHP framework was used for the development of the functionalities as it enables faster development and optimizes the application performance through its source code optimization, SQL request optimization, and caching features.

A few features that were integrated into the application were:

Natural language processing (NLP): The user community network was integrated with machine learning practice NLP to perform sentiment analysis of products mentioned. It also performed functions such as named entity recognition, noun phrase chunking, tagging part of speech, etc. to ease the functionality of the network for users. NLP was also used for the shoppable video section to enable machine translation in different languages and refined search for videos. 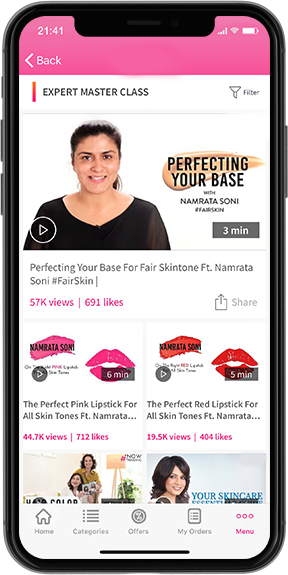 Computer Vision: This feature was incorporated in the shoppable video functionality to detect products while the video plays simultaneously and fetch product details for users allowing them to add the products to their cart at the same time

Smart recommendations and auto-tagging feature: Supervised learning technology was integrated into the app to get smart recommendations for videos, blogs, or user community content by using collaborative filtering techniques. This technology was also used for partial detection of products mentions by training the models for the community section and predicting the categories of the Videos for auto-tagging in the shoppable video section.

Content categorization: The client could categorize its content based on multiple categories and subcategories such as makeup, skincare, haircare, bath & body, and wellness, etc. for ease in accessibility through the integration of Elasticsearch for both blog and the user community section. 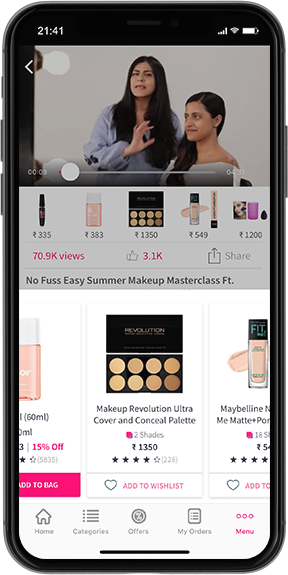 Within three months of its launch, the user community network had 150K monthly visits, 250K subscribers, with 13K new members joining the network every week. The average order value of customers coming through the community was 7.8% higher than the average customer. With an improvement in UI/UX and performance of the blog, the client experienced a 123% improvement in average time spent on the blog and a 42% reduction in bounce rate. They achieved a 40% add-to-bag conversion rate with the introduction of the ‘Watch and Buy’ feature through the shoppable videos. The user community network was awarded the best launch of the year in the Content Marketing Summit & Award 2018. The shoppable videos were appreciated and awarded for Best Use of Intelligent Content.

“I am very impressed with the way the team has been taking up the ownership of the multiple projects. The work executed by Daffodil team has received praises from internal teams across functions.”